""I Missed Christmas Vacation thanks to that Poltergeist; had to stay in the hospital wing; quite miserable being that helpless and not being able to do anything for yourself."
―Oliver Lestrange referring to Peeves force feeding him a Regression Potion

The Regression Potion is basically the opposite of the ageing potion. The drinker of this potion has their physical age regressed by an equivalent of one year per ounce for 30 days while still keeping their behaviors and memories. The potion cannot age one below 1 month however. If the amount of potion taken would have done that, it will instead keep the change permanent and the drinker will have to age naturally back to where they were. The physical body of the drinker will also adapt to the physical control of the body one would have at that age (examples are: steadiness of walking, capability of speech, size etc.) The effect of the potion can be ended prematurely if one drinks at least one ounce of ageing potion. When the potion takes effect, pink clouds of fog and twinkling lights emit from the drinker. Drinking the potion again while already being under its effects will instead increase the duration by an equivalent of 5 days per each ounce.

Unlike most potions, the Regression Potion’s base liquid is cow’s milk. To brew the potion, you add 1 gallon of cow’s milk to a cauldron, then wait for it to start boiling. Once it does so, add 5 ounces of crushed premature mandrake root. Let that boil for 20 more minutes, then add 3 ounces of powdered fairy wings to the potion before 21 minutes of boiling passes.  Let the potion then stew for 1 month, then add a hair of a newborn unicorn that was less than 1 minute old when the hair was clipped off to the mix. After this is done, stir the potion counter-clockwise 7 times and let it boil for 10 more minutes. The potion will then be complete, and around 30 ounces are available of the potion after brewing.

This section states what happens when you mess up the brewing instructions in a certain way. Any other mishaps while making the potion will simply render it useless. 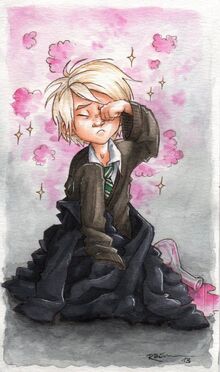 Retrieved from "https://harrypotterfanon.fandom.com/wiki/Regression_Potion_(Intellicraft)?oldid=133851"
Community content is available under CC-BY-SA unless otherwise noted.